Work has been super busy which means when I get home the computer is the last thing I want to look at, hence the lack of blogging.

We had a great weekend and we are all looking forward to a nice long weekend.  Friday night Connor and I went out to eat with Gigi and Big Daddy.  On the way home Connor discovered a bag in the back seat, which just happened to be in his reach. 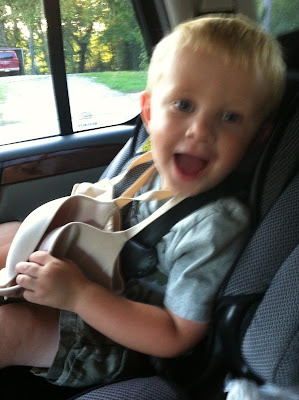 Yes that is a bra around his neck...I'm sure Matt is going to love this picture!

On Sunday, Matt smoked his first boston butt and smoked part of the deck as well (separate post on that later).  While he was cooking, Connor and I enjoyed our new Walmart pool.  I'm sure our neighbors think we are complete rednecks (they all have in ground pools), but Connor had a blast and that's all that matters! 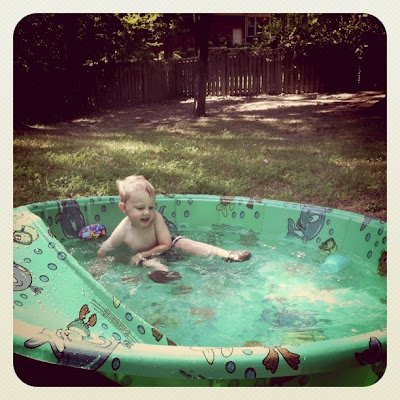 His favorite part is the little slide
No comments:

Today Kelly is hosting Show Us Your Life- Singles Day and I would like to introduce you to an eligible Memphis bachelor.

(groomsman, not the groom)

﻿He's a nice caring guy with a lot to offer and any woman would be lucky to have him.  Comment for more information or contact Ryan via facebook.

Here's our life for the past week in bullet points (and pictures): 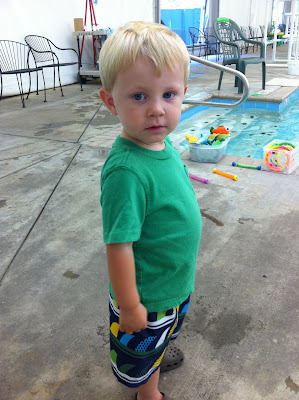 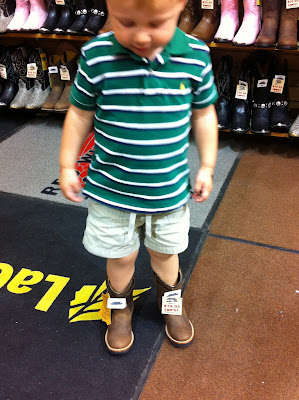 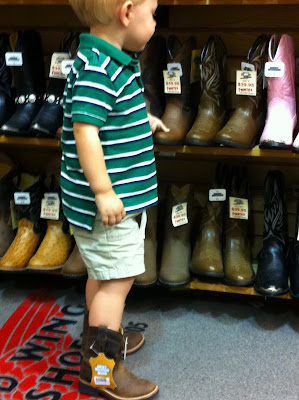 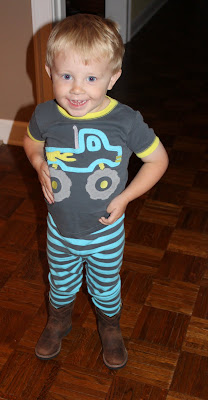 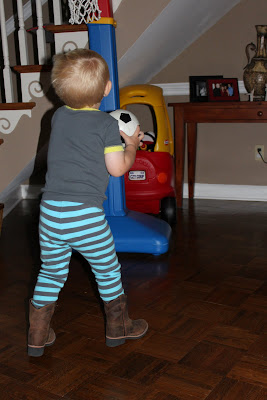 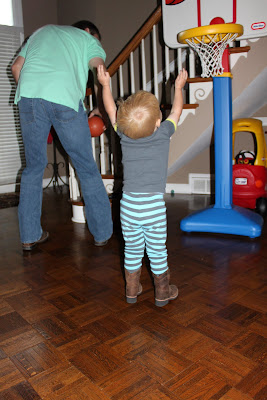 See where he gets his boot obsession from??? 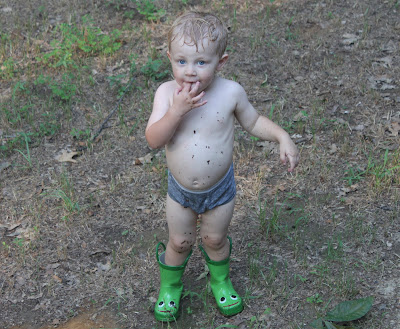 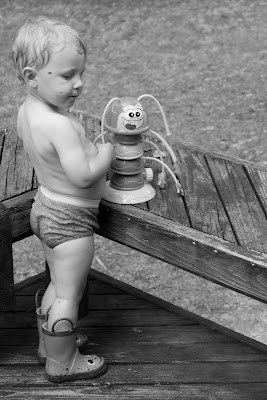 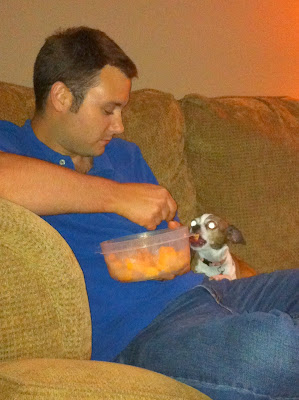 I'm finally back at work.  Connor was kind enough to share whatever he had on Saturday with Matt and I.  I honestly don't think that I have ever been that sick in my entire life. Thankfully Gigi and Big Daddy were able to keep Connor on Tuesday night.  On the positive side of the illness, I lost 7 pounds in two days!!!  But to be honest, I would have rather gained 20 pounds than be that sick.

So much for hoping for a calm week...maybe the weekend will be better!

We had quite an exhausting weekend!!!  Friday night we just stayed in and ordered pizza, we were trying to rest up for our busy Saturday.

Saturday morning, Connor had his first swimming lesson.  I was nervous he wasn't going to like the water, but he definitely proved me wrong.  It's a parent/tot class, which requires me to get in the water with him.  Thankfully the pool is heated so we weren't freezing.  There were about 7 other toddlers in the class and they all did pretty well.  He practiced blowing bubbles, kicking, jumping in, and Connor's favorite was going down the slide into the pool. 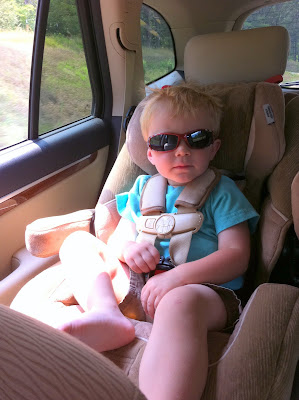 On our way home

After swimming we rushed home for lunch and a quick nap.  Connor had a birthday party for one of the kids in his class at Pump It Up.  Usually Connor clams up in social settings and takes about 20-30 minutes to come out of his shell.  However, as soon as he saw his friends, he was good to go! 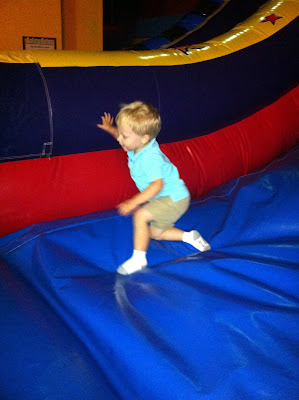 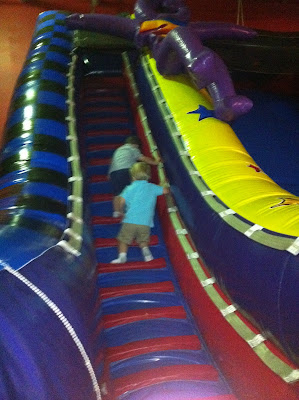 Connor and his BFF, Josh, were so brave (and big)...look how steep the stairs were!

When they finished running/jumping/sliding in the play room (for an hour and a half), it was time for pizza and cake.  While we were eating pizza, the kid directly in front of Connor didn't look very good.  All of a sudden he started throwing up and my first thought was "YOU HAVE TO BE KIDDING ME!".  All I could keep thinking about was the stomach bug and sure enough not 2 hours after we got home, Connor started throwing up.  Needless to say it was a long night and I just felt so bad for Connor.  He looked so pitiful and we ended up just letting him sleep on the couch until the vomiting stopped.  Luckily it stopped around 10, but he was so exhausted. 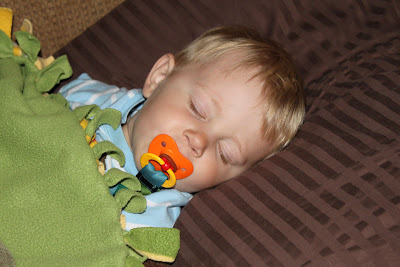 He woke up in a good mood this morning, but he was still tired and all he wanted to do was lay around.  Matt and I cleaned the house (yes, you heard right...Matt cleaned!) and Connor watched cartoons for most of the day.  It's so hot and humid in Memphis, that I don't want to do anything outside...I don't even want to leave the house. 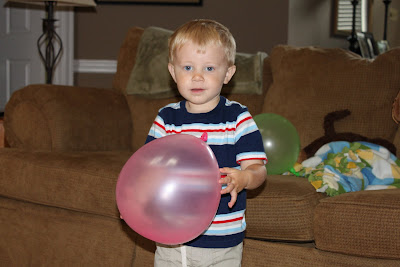 Today was one of those days where if he wanted a pink balloon he got one. 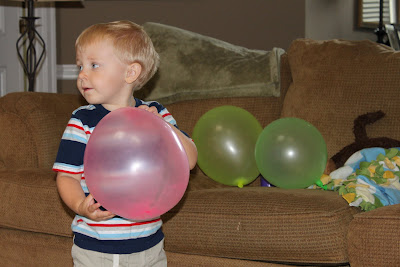 And if he wanted 5 balloons, he got that too!

Hopefully we'll have a calm week!

About two weeks ago, I decided to convert Connor's crib into the toddler bed.  He sleeps on a cot at school so I knew he would stay put and not wander around, however, I won't lie...I did have a slight fear that this could be a bad decision. 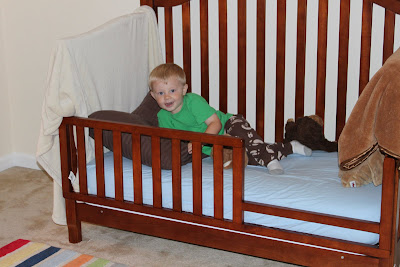 He was so excited to have his big boy bed 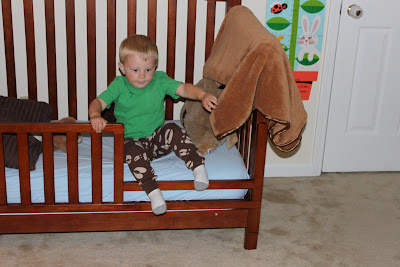 He could get out 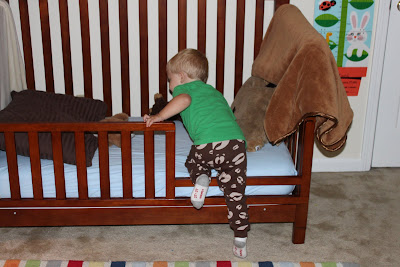 and in all on his own!

We haven't had any problems with him in the new bed and he never gets out.  He'll lay in bed calling you to come get him and that's the way I like it!

SIDE NOTE: When purchasing a convertible crib, make sure you buy ALL coordinating bed pieces (toddler rail and adult rails) when you purchase the crib.  Otherwise when it's time to put the toddler bed together, you may find out the crib/color has been discontinued.  Then you'll have to find a good friend (like Ashley) and call every boutique in the south region looking for your missing pieces in sheer panic and disgust! Luckily we found the adult rails in Georgia and the toddler rail is slightly a different color, but it will do for a few months.
No comments: