Connor experienced his first road trip over Memorial Day weekend and lets just say it will be a while before we do another one! On Friday, he had his 4 month check up and of course that also meant 3 shoots. The doctors appointment went really well and Connor got the go ahead to start eating solids. He weighs 15 1/2 pounds and 24 1/2 inches long, definitely no signs of eating trouble!

After the appointment Matt took over and I went to work. They went home and Matt was able to experience the challenge of getting stuff done and trying to entertain Connor. Needless to say, Matt persuaded Connor to nap for the entire day. We finally got out of Memphis around 4 and we had a 6 hour drive ahead of us (not including traffic and stops). Connor did so good on the car ride, all he did was sleep. We finally got to Reid's (Matt's brother) house around midnight and as soon as we parked the car Connor's eyes opened. Since he had slept all day he thought that it was play time, but Matt and I were exhausted.

Connor was having a hard time adjusting to the new environment and I'm sure the shoots weren't making it any easier. Long story short, we came home a day early. He was definitely excited to back in the only home that he knows and even more excited to stretch out in his crib (instead of being cramped in the pack n play). 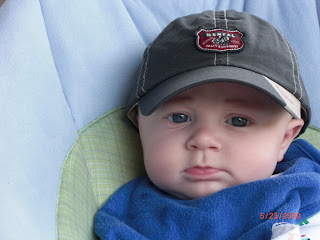 For those of you who don't get to see Connor on a routine basis you have no idea how much he talks. He talks to himself, the dogs, us, his blanket. It really doesn't matter to him who or what he is talking to, he just enjoys hearing his voice! Matt swears that he'll be saying full sentences next month :) (I know he is going to be full of questions when he gets older...Why? Well Why? Why?)

A Weekend Full of Firsts!

Well this weekend has been full of firsts for Connor! We started the weekend off Friday night with with a new item on the menu, rice cereal!!! Connor seems to be so hungry even after he has had about 35-40 oz of formula a day. So I decided that it was time to add a little substance to his belly. Colleen warned me that the transition was going to take some getting used to (she also said to expect gagging). Thank God she warned me otherwise I would have thought he was choking and probably called 911, then I would have felt like an idiot! Anyways, back to the food...he only took a couple of bites, because he mainly wanted the bottle.

Later that night we decided that it was time to have Connor sleep in his own room. So I got everything ready for the big switch. The monitor was setup, the wave machine was on, and the night light was plugged in. Like every other night, Connor had no problem going to sleep. I layed him in his crib and he was out! However, the night didn't go so smoothly for me. I think I got up at least 3 times to go upstairs and make sure that he was still breathing. It was Matt's morning and he said that when he went to feed him, his leg was hanging out the front of the crib. He is such a wiggle worm, he'll probably be that kid in school who gets his card pulled because he can't sit still!

Saturday we ran errands as a family. Matt promised to get Connor a Johnny Jumper when he was old enough (according to the box), well since he turns 4 months this week it was time to go to Babies R Us. I have to say that Matt was right on waiting, he is still a little too small to enjoy it. Oh well, at least we have it for later! Saturday night, Matt and I went out to eat with Chase and Cassie. Granny Lonnie watched Connor and I have no idea what she did, but Connor slept until 7 am!!! (You have no idea what 2 extra hours of sleep means to us these days)

Today, Matt went to the farm while Connor and I got a late start. It was the first nice weekend Memphis has had in about a month (that's because it's Memphis in May and it always rains for all the events). Connor had more rice cereal for breakfast and then we went to the Avenue (an outdoor mall) for some shopping. Connor has loved shopping since he was a month old, actually I think it is more the stroller ride that he loves.

Here's Connor in his big boy highchair, doesn't he just look so BIG?!?!? 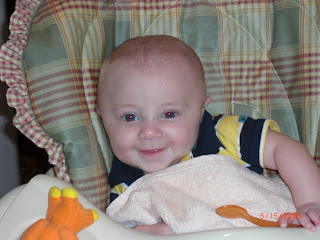 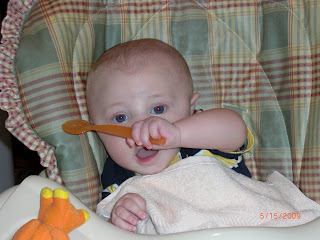 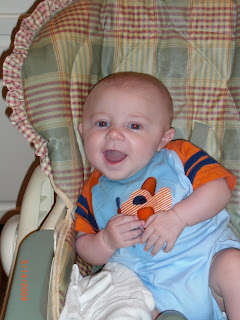 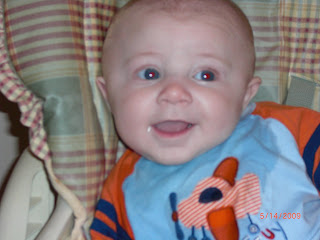 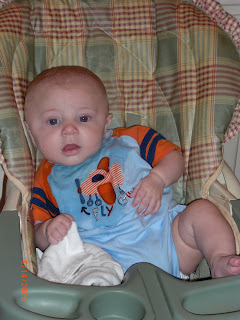 Long time without an update

Well for those of you who have been anxiously awaiting an update on baby Connor, I apologize. I really don't know where the time has gone! Everyone has finally recovered from their illnesses and I hope we all don't get sick at the same time again. Connor has started to cut his two bottom teeth and the drool is non stop. Bless his heart, Matt and I went to Babies R Us to get him some teething toys to help ease the pain. However, since he is so young (most babies don't get teeth until 6 months) the toys were too big for his little mouth. I think he has just started to realize that the pain isn't going away so he is just dealing with it.

Connor has become quite the social butterfly in the last couple of weeks! With everyone getting married, we have had wedding showers for the past 3 weekends. Good thing that Connor doesn't mind being passed around, otherwise we would have a very expensive babysitting bill! However, I do have to thank the grandmas in Memphis because they have been very helpful with Connor. Especially on those days when Colleen couldn't babysit and the nights when Matt and I just need a break. We are extremely lucky to have family close by and enjoy seeing Connor getting to know them.

Besides the teeth, not much has changed with Connor. He now weighs about 14.5 pounds and is starting to display his personality in full force. I do have to thank the Jones men for all the patience that has been passed down to Connor! (and if you know any of them, you know there isn't much patience) Connor is starting to get to the point where he is bored with just laying around. I think he really wants to be running around like a mad little man, which kind of scares me for what is going to come (I may be that parent with their child on a leash, J/K). He is so close to rolling over and you can definitely feel him trying to pull himself forward. And on top of all that he has started to sleep in his bassinet, which was a very big accomplish for him because of his acid reflux. This weekend he is going to make the BIG move upstairs :( (So I will let you know how he does, I'm almost more worried about me)

I promise that the next post won't be far away! Connor goes for his 4 month check up next Friday, so I will be sure to give everyone his new stats. Here are a few new pictures that will surely brighten your day! 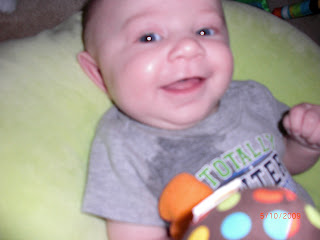 See what I mean about the drooling situation??? 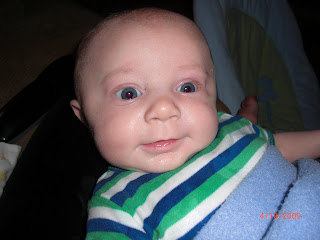 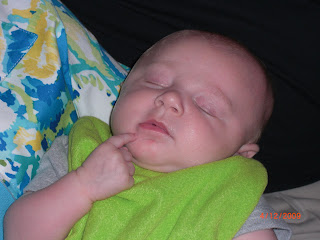 Definitely in deep thought about something! 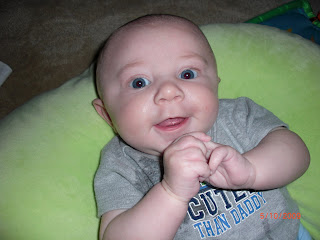 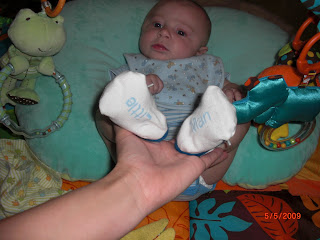 Robbie from work got Connor the cutest socks ever! As everyone knows we have always called Connor our little man, so when Robbie saw these socks he said he couldn't pass them by. The socks look like tennis shoes and they even have real laces at the top. However, the best part is on the bottom of the feet. One foot says "Little" and the other says "Man". Thanks to Robbie (and Rachel's mom's store)!!! 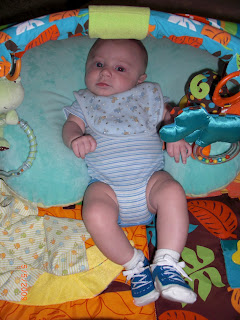