A Doctor Visit and Anniversary Celebration

I can't believe the weekend is over ALL READY!!!  Here's how our weekend went... 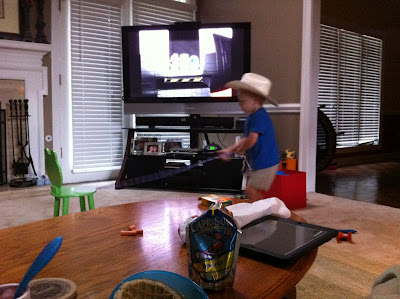 Connor decided it was time to put on his cowboy hat and rope some chairs!

Saturday morning Matt and I took Connor to open clinic because he was complaining that his ear was hurting.  He hadn't been running a fever, but I figured we should take him anyway.  Turns out that both tubes are gone and he has an ear infection in his left ear.  He's on antibiotics for about 10 days and hopefully that will knock it out.  While we were there, Connor also got his flu shot.  I think the older he gets the worse the fear is for the shot.  That's all he could talk about for the rest of the day and walked with a limp for most of the day too! 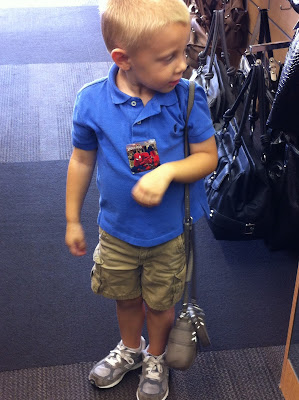 Saturday afternoon we met Aunt Cici for lunch and then a little retail therapy.  Connor was a good sport for most of the trip.  Here he is modeling a purse in DSW...Matt was none too thrilled by this picture! 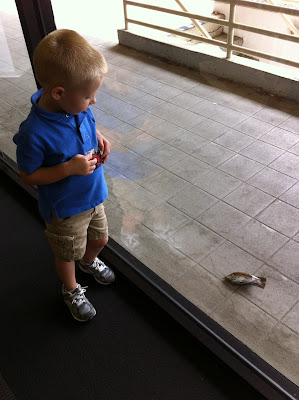 Then he found this bird that was "sleeping". He couldn't really figure out why the bugs were clawing all over it.  Finally he said "I think it's dead!".  Bless his heart, he was so concerned about the bird!

Saturday night, Connor spent the night at Yaya's while Matt and I went out to dinner to celebrate our anniversary.  We enjoyed a delicious dinner at Ruth's Chris and then had fun watching the Ole Miss/Alabama game with friends. 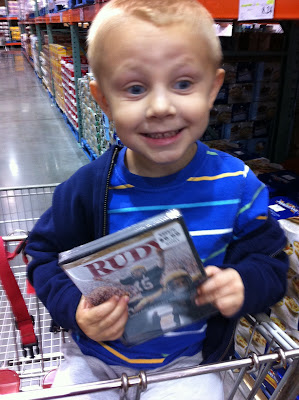 Sunday we made a trip to Costco and Connor got a new movie, Rudy.  Believe it or not, he really likes this movie.  He saw it on TV a few weeks ago, but hated the commercials.  Connor loves anything football right now!
No comments: 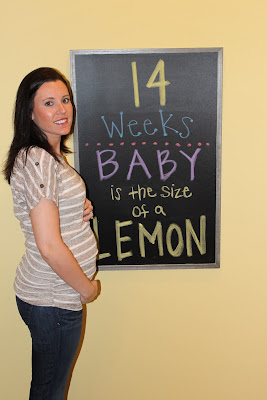 Maternity clothes? I have to admit that I did some shopping last week for new clothes and I look forward to wearing some new outfits.  I'm sure it'll give me a little pep in my step!

Best moment this week: We celebrated our 4 year anniversary

Miss Anything? Not missing too much this week

Anything making you queasy or sick: No

Symptoms: I'm starting to get my energy back and I look forward to completely little organizational projects around the house.

Mood: Very content with life right now.  I'm enjoying the one on one time with Connor, because I know he won't be the only child for long.

Looking forward to: No big plans this week, in fact, this coming weekend will be our one and only free weekend of October.
2 comments: 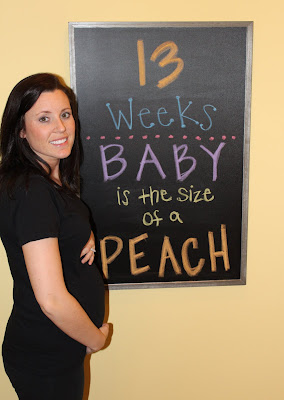 Best moment this week: Getting an unexpected looked at baby and hearing that everything was fine.

Miss Anything? Being able to just go, go, go.  I really have to remind myself to take it easy and that I'm pregnant.

Movement: Little flutters, but nothing distinct.

Anything making you queasy or sick: No

Symptoms: Had some complications early last week, which had me leaving work early and speeding to the doctor's office.  Everything with baby checked out fine, but I was put on "relaxed" bed rest for Wednesday.

Mood: Starting to feel a little more like my normal self.

Looking forward to: A calm week with not much to do and trying to relax so I don't end up on permanent bed rest! 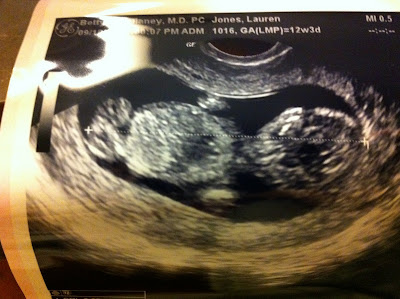 This past weekend we celebrated Gigi's birthday with breakfast at Perkins.  We were a week late celebrating because she ended up having the stomach bug on her actual birthday and I try to stay clear of that illness! 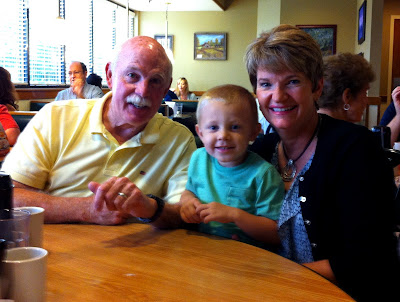 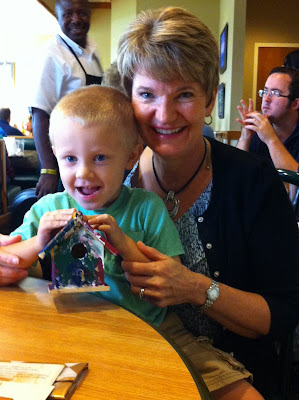 Connor painted a bird house for Gigi...Happy Birthday!
No comments: 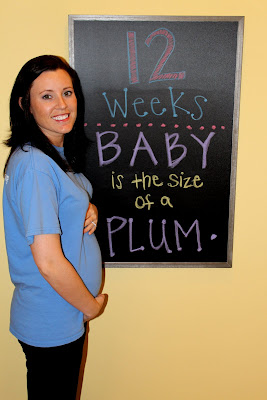 How far along? 12 weeks, but I feel further along since I'm so much bigger earlier this go around.

Sleep: Waking up about once to use the restroom.

Best moment this week: Finally letting everyone in on our little secret!

Miss Anything? My energy!  The house is in desperate need of a deep clean, but keeping up with a 3 year old is about all the energy I have these days.

Anything making you queasy or sick: No.

Symptoms: Still pretty tired and I seem to be queasy in the evenings.

Mood: If you asked Matt and Connor, they'd probably say cranky!  My fuse is a lot shorter right now because I'm so tired and nothing is worse to me than feeling queasy.

Looking forward to: The cooler weather we are finally getting to enjoy!


So I didn't do the whole weekly bump pictures when I was pregnant with Connor and it's one of my biggest regrets.  I'm hoping somewhere deep down inside me I find an ounce of creativity because this first chalkboard took me about 45 minutes!
No comments:

I always end up with a bunch of random iPhone pictures, so here's a post just for them!﻿ 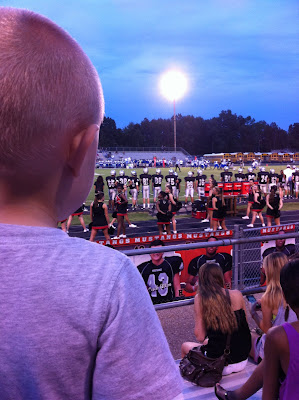 It's that time of year again!  However, this year, Connor is more interested in the actual football game instead of the Pom squad. 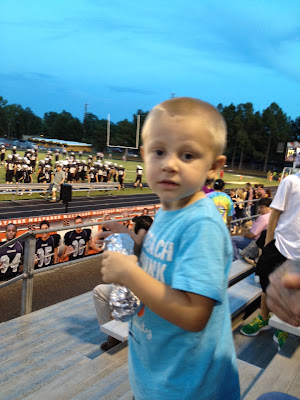 He's already been to both of Houston's home games, he's definitely a dedicated fan! 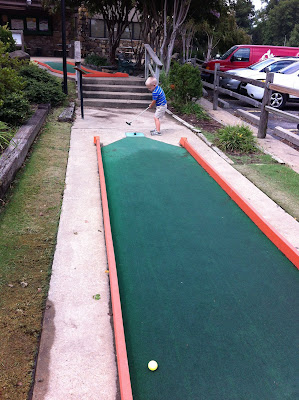 Labor Day weekend Matt was dove hunting with the guys, so Connor and I decided to go play a game of Putt Putt.  I knew he would enjoy it since he had so much fun on the cruise playing miniature golf. 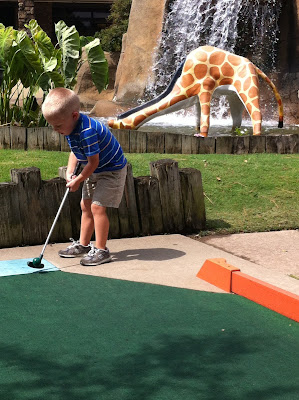 He actually made a hole in one on this shot! 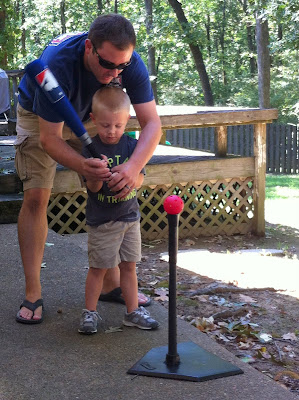 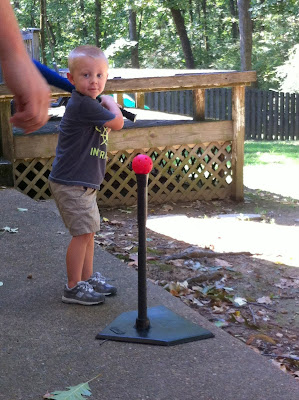 Anything to keep him busy makes us happy, not to mention it wears him out 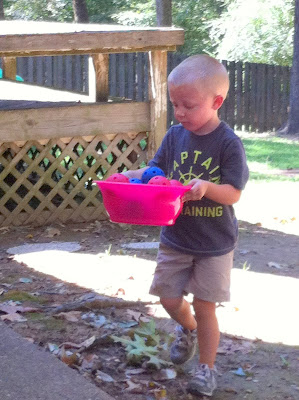 He hits all 16 balls and then goes out into the yard and basically does an Easter hunt to pick them all up, just to do it all over again! 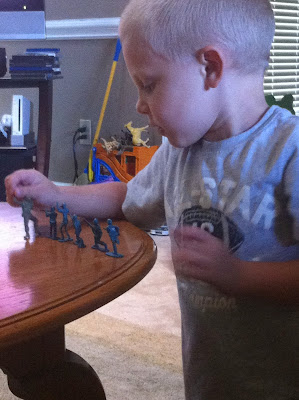 Connor still has his OCD 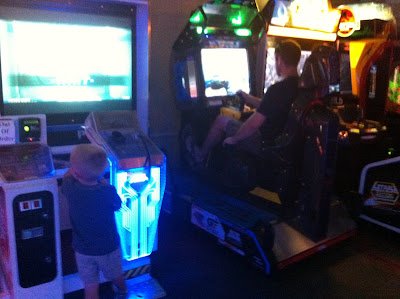 Matt was jealous he didn't get to participate in the first trip to Putt Putt, so we went again this weekend.  Not sure who is having more fun! 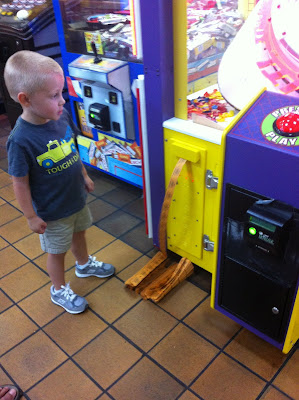 Then Matt played this stupid balloon game and hit the jackpot 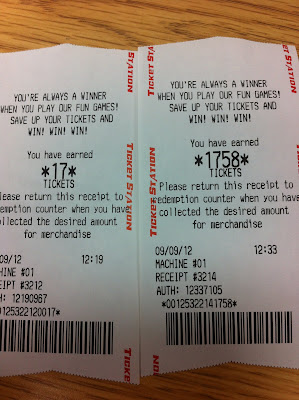 This is how many tickets we had...just imagine how long it took us to pick out the prizes at the end! 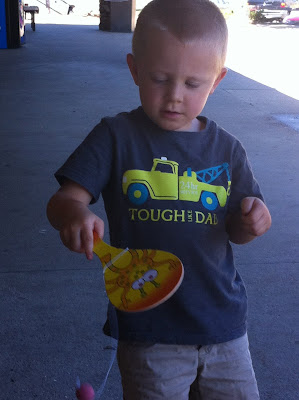 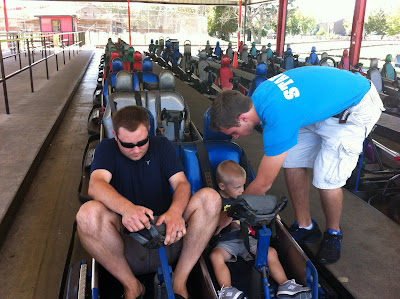 Then it was Go Kart time 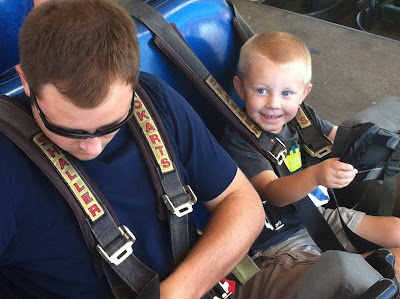 Connor was so excited! 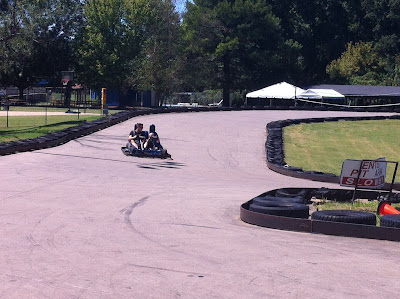 They were the only ones out there, so I wasn't worried of some stupid kid trying to bump them :) 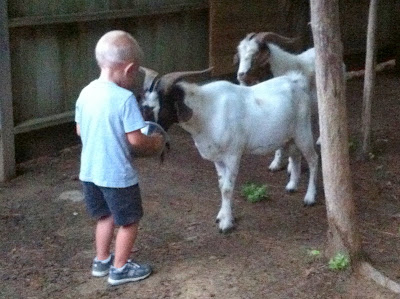 A few weeks ago we went out to dinner in Arlington and stopped by Chase and Cassie's house.  Connor always asks to feed the goats, which used to cute but now they have gotten so BIG. 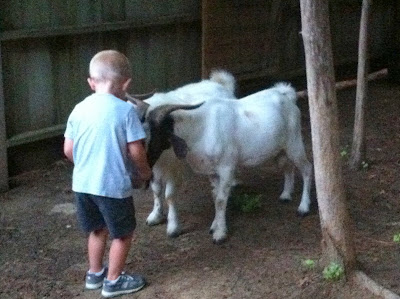 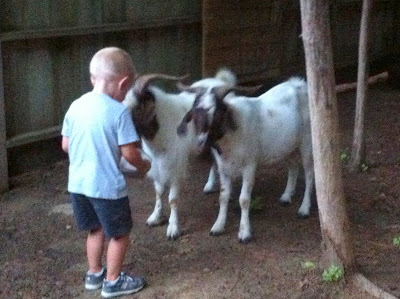 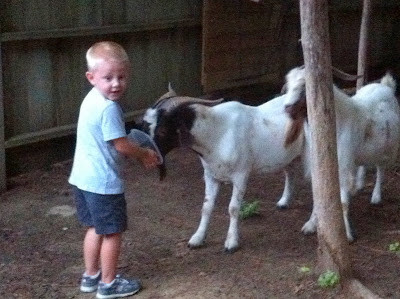 I'm thankful that we live in the city.  That's enough of a reason not to have a horse, cows, or goats in our yard.  Otherwise I think if Connor had it his way, our house would look like a petting zoo.  It's good to have family and friends with these kinds of animals, we can just visit and leave!
No comments: