Connor's "chore" during the week is to get Cooper in her cage and give her a bone.  I really gave him this "chore" because I thought Cooper would like him better if he was always giving her treats.  We are still working on the friendship between those two, but Connor loves to practice putting Cooper in the cage (even on the weekends). 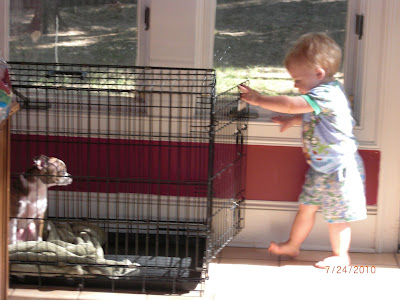 Thankfully Cooper is a good sport and plays along!

One of my favorite things about watching Connor grow up, is watching him be Matt's mini me.  Connor absolutely idolizes Matt and wants to do everything he does!  Connor's new thing is to "accidentally" roll a ball underneath this piece of furniture in the sun room.  The only way to get the ball out is to use a wooden spatula because your hands can't reach all the way to the back.  He is so serious when he's attempting to get the ball.  Then he'll stand up and say "Where is it?" just so Matt will come and help.  By the end of it, they are both laying on the floor looking for the ball.  All I can say is TOO CUTE! 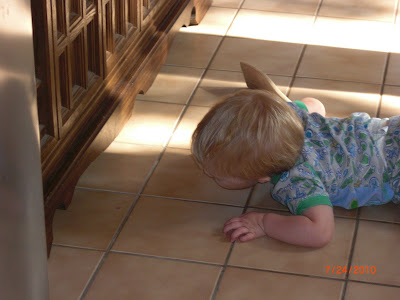 This is him scoping out the ball 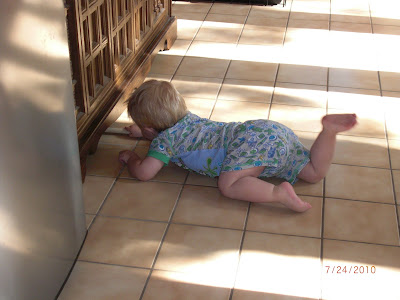 First attempt with the spatula 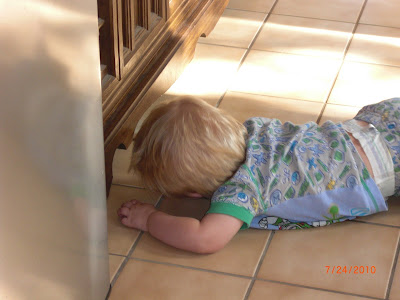 He was really getting into it!

Matt ended up helping him get the ball and then Connor started the process ALL over again.
No comments:

So this past weekend we took a family trip to the farm so Matt and Mr. Terry could doctor the new beef bull.  It's not new like a newborn, just new to the farm.  Somehow this bull had gotten pink eye in both of his eyes and he looked so pitiful.  All I have to say, is that I'm glad I wasn't the "doctor"! 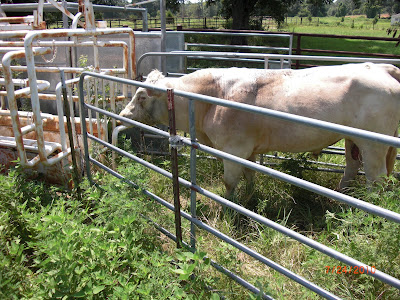 So far the bull doesn't have a name yet...I'm anxious to see what they pick. (Wrangler, Sea Biscuit, Sea King, and Play Boy are just a few names of past bulls)

While the guys worked on the bull, Connor and I patiently sat in the bed of the truck.  (Did I happen to mention that it was 103 on Saturday???)  Needless to say, Connor's patience doesn't last very long these days.  So we decided to head over to the fence and look at all the other cows who were being nosy.  Usually Connor is riding in the truck when he sees the cows, this was his first experience to be up close and personal. 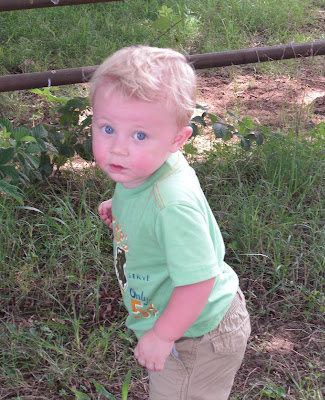 Look at those blues eyes!

At first he was a little scared and you can't blame the kid.  I squatted down to his level and the cows seemed like dinosaurs at his height!  After a couple of minutes he started to warm up to them.  He ran back and forth looking at ALL of them.  The calves were extra spunky and Connor thought it was the funniest thing watching them play. 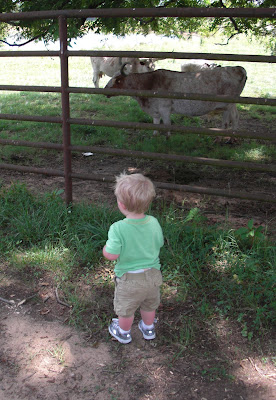 This is when he was watching the calves play 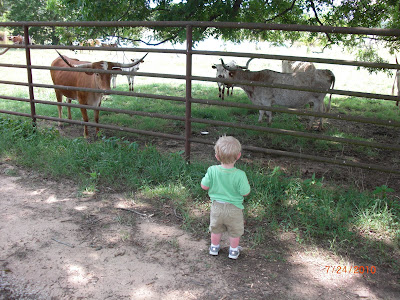 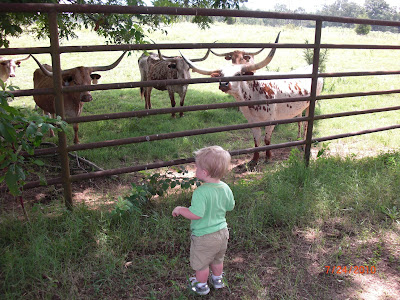 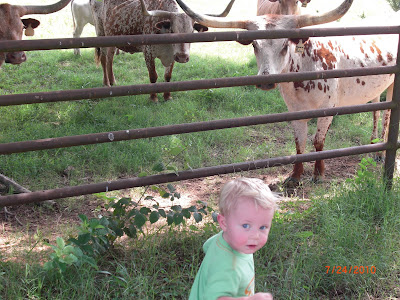 He wanted to get closer to the fence, but I wouldn't let him in the grass since he had shorts on. The chiggers out at the farm are horrible and that is the last thing I needed, a toddler with chiggers.

By the end of our visit, Connor and the cows were speaking the same language!  (You'll need to turn your volume up for this one, I promise you don't want to miss it!)

Where have you been?

So I'm reminded daily (by some people) that I haven't updated my blog in a while, 14 days to be exact.  I'd like to say that I've been unbelievably busy, but that would be a lie.  The truth is that I have just been in a huge blogging slump.  So let's recap the past 12 days. . .

Matt and I attended Todd and Emily's wedding, July 10th.  Todd and I work together and I have to say that he was probably one of the happiest grooms I've ever met!  Not once did I hear him complain about any of the wedding responsibilities he had to do.  Almost everyone from work was able to attend the wedding and we had a wonderful time.  Everything was gorgeous and the ceremony was filled with love!  Of course I got pictures of everyone expect the bride and groom, oops. 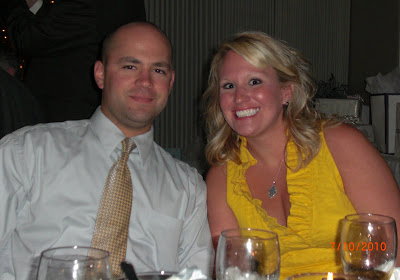 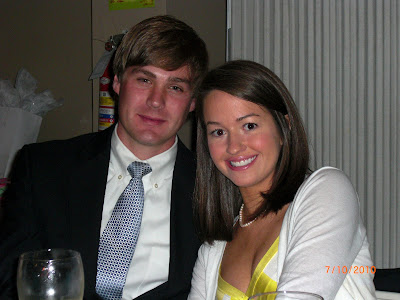 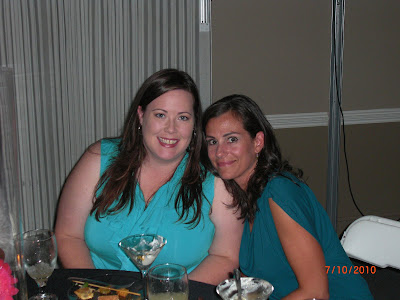 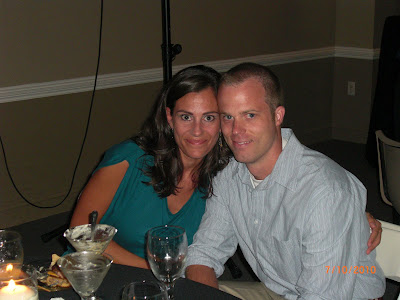 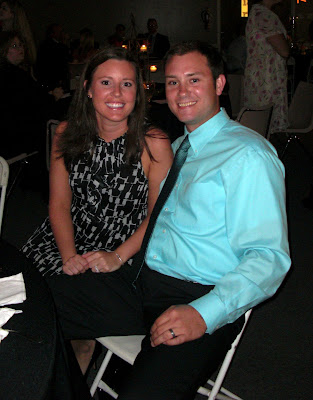 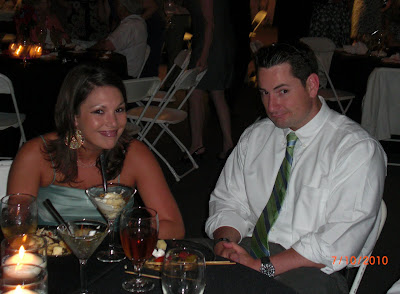 Yaya watched Connor for the night while we went to the wedding and out for drinks afterwards.  He had an absolute blast while he was there, like always.  He ate like a pig and I'm sure she wonders if I ever feed him, but I definitely can't cook like Yaya.  Garner was also at Yaya's for the night and Connor loves to play with her.  I asked Garner if she wanted a little brother like Connor and her response was "I just want him"!  How sweet is that?!

On Sunday, we went to Gigi's and Big Daddy's house so Connor could play one last time before my mom had her surgery.  Big Daddy was working on the deck and Connor wanted to get down and dirty so he put on his gloves to lend a hand.  He has so many toys and he's obsessed with these gloves! 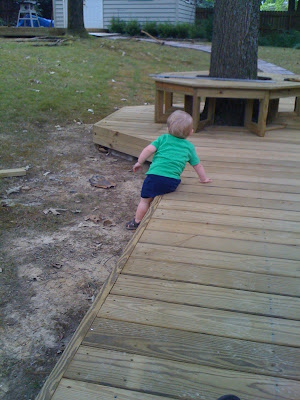 I get so nervous he is going to get a splinter; I guess that's just part of having a boy! 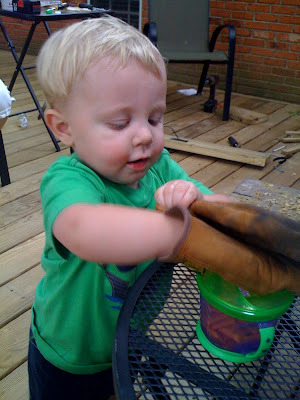 The gloves had to be on to do everything. . . 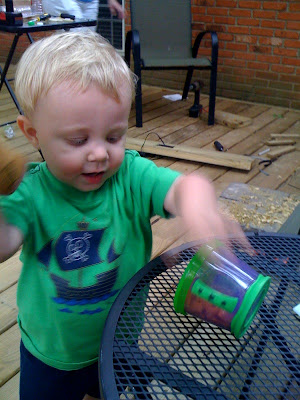 Can you see the frustration?

This past week, Connor was sick and couldn't go to daycare.  Thankfully Aunt Pat was available to watch him!  He had a fever and rash so he was out of school for a day.  The rash was from me (dumb mommy) switching his laundry detergent and body wash, all in the same week.  The fever was from some bug his friends gave him at school (gotta love daycare).

Then this past weekend, I spent most of my time at the hospital.  I'm happy to say that I feel like a thousand pounds has been lifted off my shoulders.  My mom's surgery was successful and she is now resting at home.  She's in some pain, which is to be expected, but the surgeons couldn't have been happier with the procedure.  While I was with my mom, Matt had the opportunity to see what it would be like to be a single dad...I think the reality of that scared him! 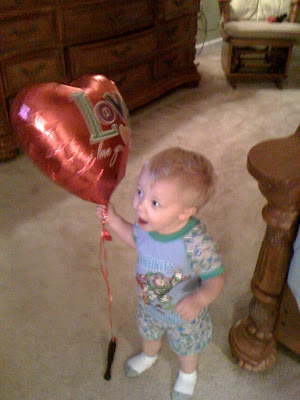 Connor got this balloon from my mom's 'good luck' party
and he has carried that thing around everywhere!

So I guess I could say, I was a little busy...wedding, sick child, and mom's surgery all in 14 days!

This weekend was very relaxing, we had no plans and no schedule!  On Sunday we went out to the farm as a family.  It's the first time I've been out there in a while, however, Connor rides frequently with Matt.  The ride can get a little long especially when the toddler in the back acts like he has ants in his pants.  His attention span these days is about 2 seconds! (Thank goodness for the TV in the truck!!!)

This time Connor got to ride on my lap in the front seat once we got to the farm.  He was so excited to see all the cows!  He started saying "Mooooo, Mooooo" and he was grinning from ear to ear. 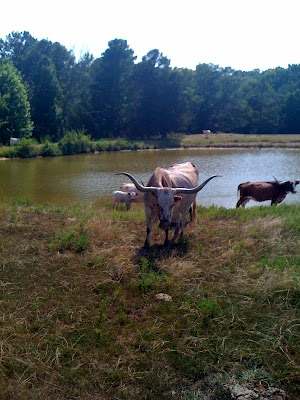 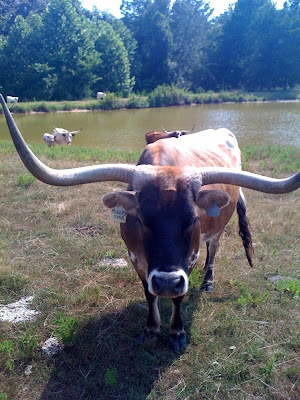 See why Connor was so excited??? You could almost touch them from the window!

Once we got to the back of the farm, Matt wanted Connor to practice driving.  Apparently Matt did this with his Granddaddy and still remembers it to this day. 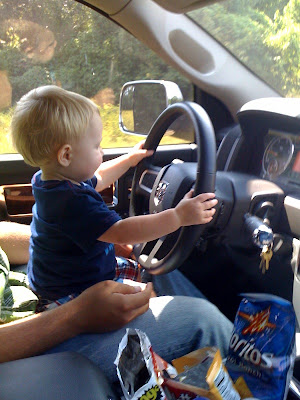 As soon as I saw Connor sitting in the driver's seat, I had a flash forward to him being 16.  Even though we are no where close to that, time is really flying by.  I don't know who was more excited about the driving lesson, Matt or Connor. 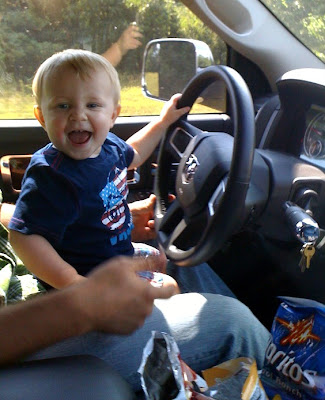 As you can see from the pictures, we were very indecisive when we went to the store for snacks.  And those snacks were so tempting for Connor, that he couldn't resist.  We will definitely have to make a rule that there is no eating and driving, once he gets behind the wheel! 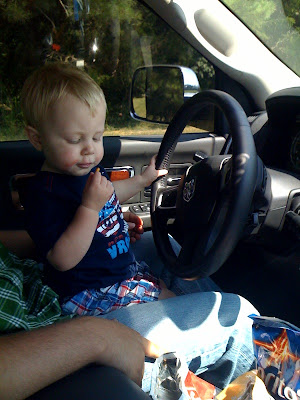 Obviously not paying attention to driving!

Anyone who knows Matt, knows that he loves anything that goes fast and Connor is following in those footsteps.  Judging by the picture below, I am in for a very rude awakening in the near future with these two! 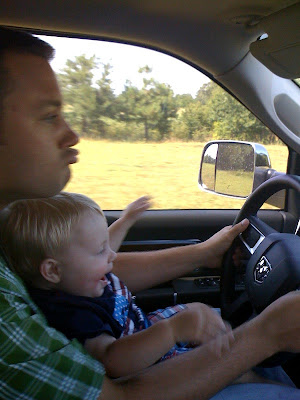 When Connor and Matt weren't eating or driving, they were staring off into La La Land. (Also known as ADD, which is a very strong personality trait for the both of them!) 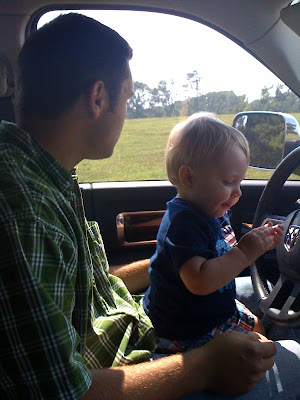 While they were having a good time driving, I just sat back and enjoyed the ride.  However, I can already tell you that I will NOT be the one who teaches Connor how to drive!  Hopefully Connor will have plenty of days practicing with Matt in the field before he's let loose on the road.

*** All of these pictures were taken while riding on the farm and we never went above 5 mph.  At no point was Connor in any danger while driving. ***

Blogging Day of Silence For Cohen 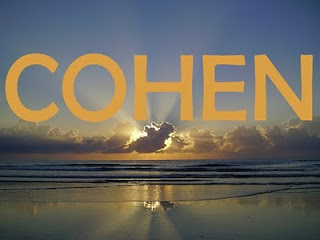