Anyone who knows me, knows that I am a planner.  So the "plan" for Walker's delivery was for me to be at Germantown Methodist at 7:30 am on Monday, March 25th to be induced.  I was still 3 cm when I went for my last check up on March 20th and of course my doctor informed she wasn't on call for the weekend.

We had a busy last weekend trying to finish up all the loose ends.  The nursery was finally complete, we were stocked up on groceries, and Connor's bag was packed.  Little did I know, my "plan" was about to change on Sunday night.

Connor woke up around 10 pm with the stomach bug.  I couldn't believe that this was happening!  I felt so bad for him and I was praying Matt and I wouldn't get it.  After going up and down the stairs several times tending to Connor, I decided it was time for him to lay on the couch so he'd be closer.  Matt slept on the big couch and Connor was on the little couch, lights were out around 11:15...then around midnight the contractions started!

I laid in bed for about an hour trying to relax and hoping just to make it until our scheduled induction time.  Finally at 1 am I got up and told Matt I was getting in the shower to see if the contractions would slow down (they were about 5 minutes apart).  Meanwhile, Connor was still getting sick.  The shower did nothing for the contractions and they were starting to get stronger.

I called mom and gave her a heads up, Matt jumped in the shower, and I finished packing everyone up.  We left the house around 2 am and met my mom and Roy at the hospital.  They took Connor to their house while we settled in at the hospital.  Matt made up his bed on the comfy hospital sofa and I tried to relax.  Finally at 4:30 am I waived the white flag and asked for the epidural, best decision ever!  The back labor was very painful and my whole body was staying tense.  After the epidural I was able to relax and close my eyes, although I never went to sleep.

My mom came up to the hospital around 9, while Roy stayed home with Connor.  At this point Connor hadn't gotten sick anymore and was just trying to regain his strength.  Dawne arrived at the hospital around 10.  We all started making bets on the weight, length, and arrival time...none of us were going to be right!  The nurse came in to check me around 11 and said my bag of fluid had come out, but hadn't burst yet.  She wasn't allowed to break it and had to get the on call doctor.  Little did I know, Dr. Dulaney would be walking in 10 minutes later telling me we were about to have a baby!

Mom and Dawne left the room around 11:25 so the doctor and nurses could get the room setup.  Then it was time to start pushing and three contractions later we welcomed Walker Hudson at 11:42 am. 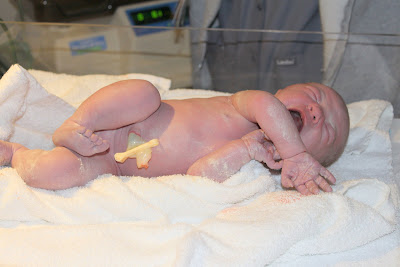 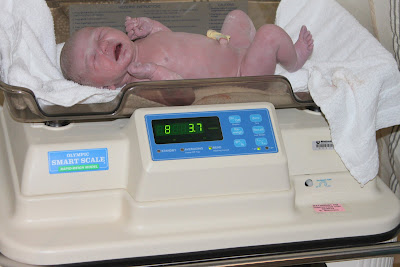 He weighed a whole pound heavier than Connor 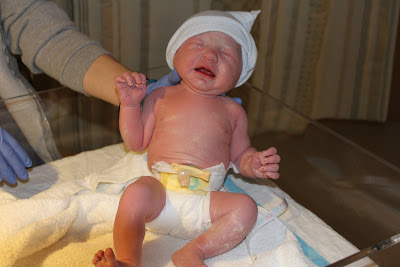 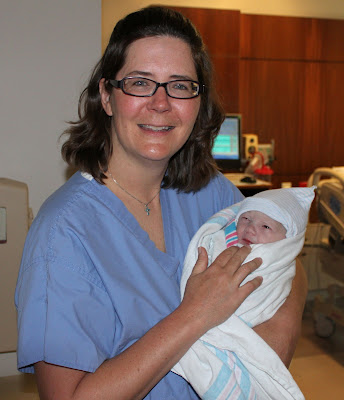 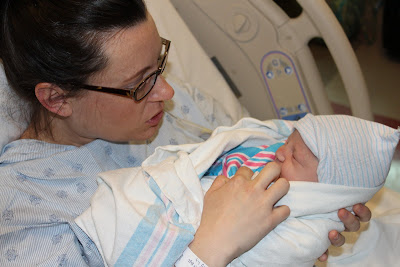 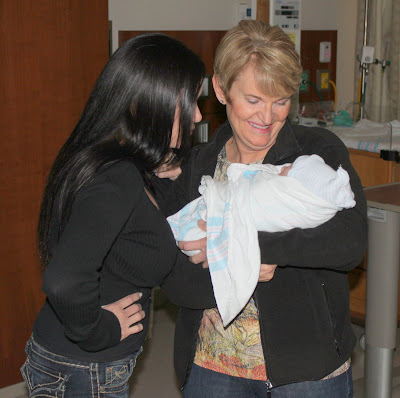 Yaya and Gigi were back in the room by 12:15 and we all couldn't believe how fast everything went 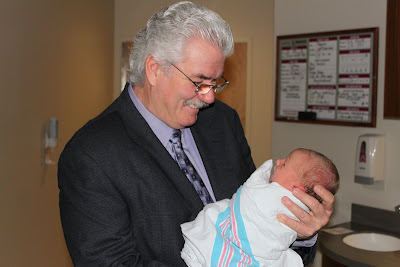 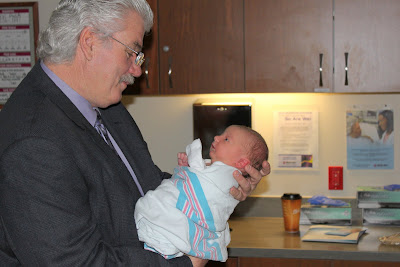 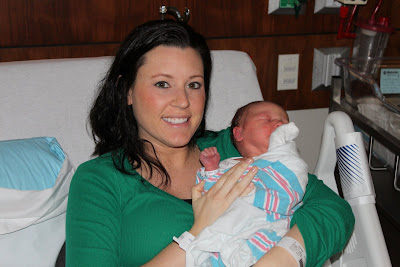 Day 2 brought back all the memories of pain after delivering Connor... 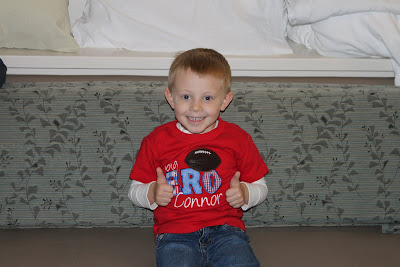 Connor's pediatrician said he had to stay away for 24 hrs before visiting the baby.  He was definitely excited to meet him.  So on Tuesday morning, Gigi and Big Daddy brought him up before school. 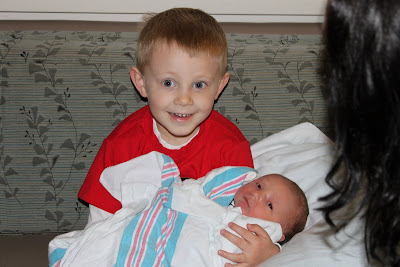 So sweet and melts my heart 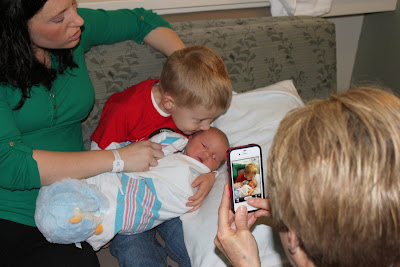 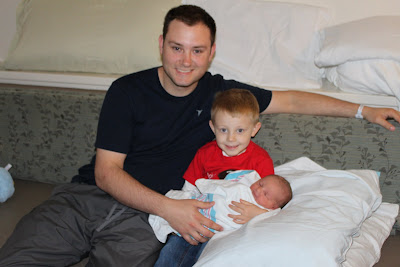 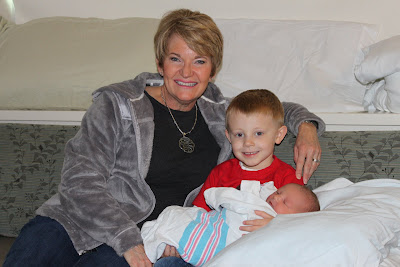 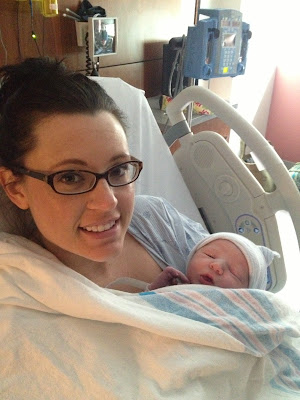 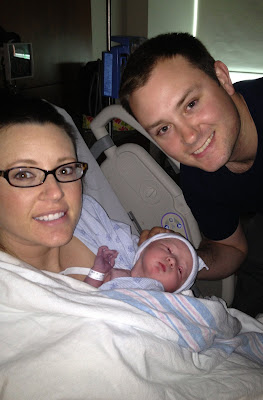 Can you tell I was tired?  I hadn't had any sleep since Saturday night! 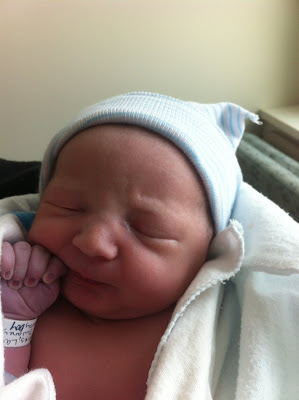 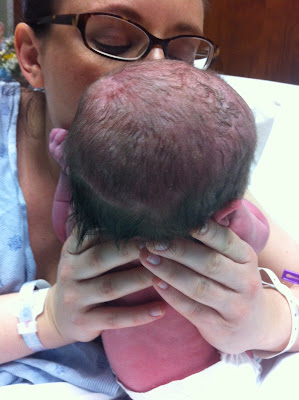 Look at all that dark hair! 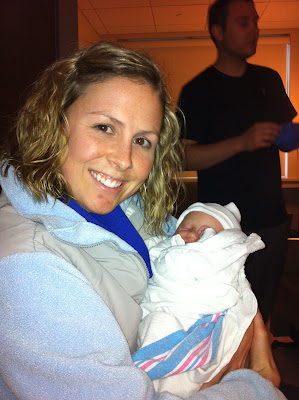 Cici and Uncle Chris came to visit the first night

﻿We learned a few things the first go around with Connor and decided to make some changes during the hospital stay with Walker.  For one thing, at night we sent Walker to the nursery.  I hadn't slept in over 24 hours and it was definitely needed!  Also, we stayed for 2 nights instead of rushing home.  We left Wednesday morning around 11 and I was already feeling much better than I did after having Connor.  Then it was time to face the reality of being a family of 4 (without the help of the nurses!).  The first week wasn't bad at all because Walker was still sleeping about 21 hours of the day.  Then the fun would begin...
No comments:

Walker's nursery is finally complete and we were definitely cutting it close with only a week to spare before my due date.  This nursery is simple and exactly what I wanted.  It wouldn't have been come together without the help of Gigi and Big Daddy, they both did so much work.﻿  Gigi made the curtains and Big Daddy hung all the hardware (and countless other things).  It was definitely a labor of love! 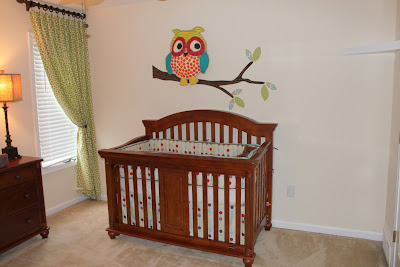 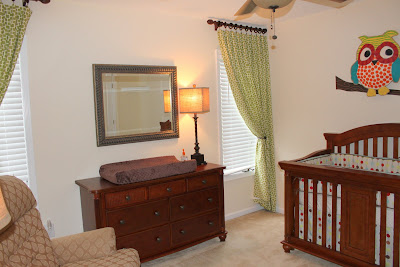 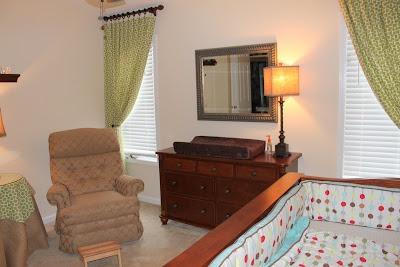 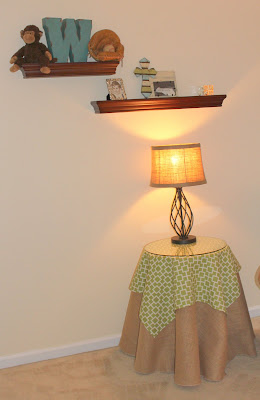 The baby has a name and has had a name for a while, I've just been rather slow updating the blog these days.  When we found out that it was another boy, the names in my head starting swirling around.  I knew I wanted a family name mixed with another name, we just had to figure out (more like agree on) the combination.


Walker is Matt's dad and Matt's granddad's middle name.  Both are two strong, successful, intelligent, loving men and I don't think we could have picked a better first name!  Hudson is just a name that I have always liked and the two names flow well together.
No comments:

(No picture, just for memories)
How far along: 36 weeks
Maternity clothes: Yes
Stretch Marks: None that I can see
Sleep:  Still off and on; some nights are really good and other nights I'm up several times
Best Moment of the Week:  Getting everything put in it's spot for baby to make his debut
Miss Anything:  Energy and bending over to tie my shoes (it's really quite a sight)
Movement:  I'm convinced this baby is going to be wild, he is nonstop moving
Food Cravings:  Still nothing this week, I have completely lost my sense of taste and smell (I think it may be from some medication I had to take)
Anything make you queasy or sick:  The night time queasy is back in full force
Gender:  It's a boy!
Symptoms:  I have all the symptoms of a 9 month pregnant person....braxton hicks contractions and pressure are at the top of my list
Mood:  I'm starting to slow down in the energy level, so when I get home from work I'm usually exhausted.
Looking forward to:  My check up on Tuesday, I'm anxious to hear her prediction on arrival time!
﻿
No comments: