Anniversary + Sickness = Having a Family!

So this past weekend was our 1st anniversary! I really don't know where the year has gone, but one person comes to mind... Matt and I decided that we needed a break from Memphis, so we took a drive to Nashville. We stayed at the Opryland Hotel, which is absolutely gorgeous! The afternoon started with a little shopping at Opry Mills and then dinner at the steakhouse inside the hotel and then we went downtown. We had the sweetest waitress at dinner... 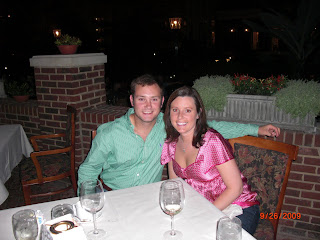 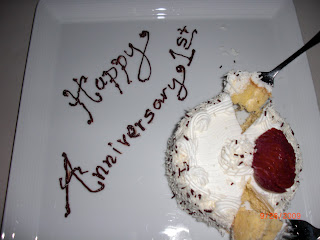 In the meantime, Connor was staying with Gigi and Big Daddy. What was suppose to be a day stay turned into a weekend stay for him. I went to drop Connor off at daycare and they wouldn't let him stay because of some bumps/blisters on his face. We went straight to the open clinic at the pediatrician's office and found out that he had the hand foot mouth virus. Apparently it is something that is going around the classroom :)

Once we got back from Nashville on Sunday we picked Connor up and went to see Aunt Cece's new puppy, Knox! Knox is adorable and Connor didn't know what to think about him... 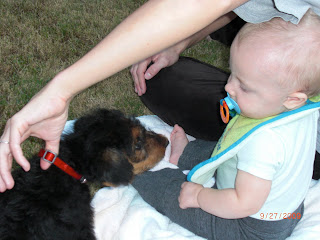 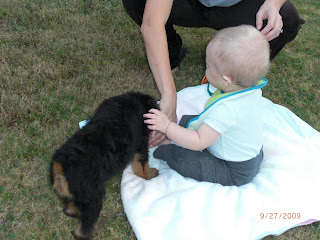 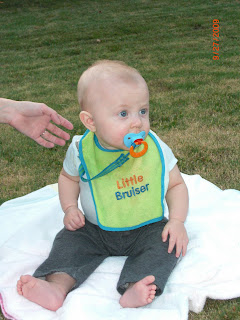 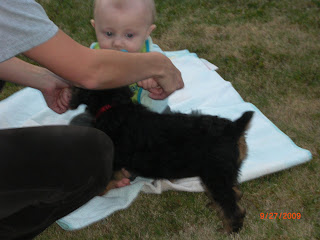 So that was the weekend, which brings us to Monday. I had a feeling this morning when I dropped Connor off at daycare that he wasn't going to last all day. He did have a doctor's note to return, but something else was off. After lunch, I got the phone call to come pick him up because he had a fever. When I got there I knew he wasn't feeling good because he was so cuddly. As Connor's gotten older, it seems like he is becoming very independent...for instance, he doesn't like to fall asleep in your arms anymore he wants to put himself to sleep in his crib. Anyways, hopefully Connor will be feeling better in the morning. But until he does, he'll be with Gigi. 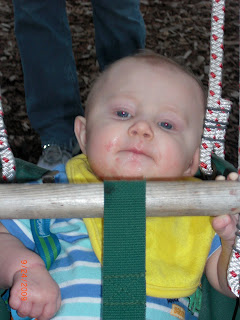 You can kind of see the bumps on his face..
No comments:

Life lately has seemed so busy, but I'm not sure why. We usually have a least 2 things going on during the week after work. Last week I was busy with a project for Connor's classroom. I definitely now know who will be helping Connor with his homework...me! The project was to make a collage for the open house this week and if you know me its not something I'll just slap together. I have a ton of pictures, but they are ALL on my camera. Needless to say, a very simple project had turned into some kind of masterpiece for me. (I ended up finishing at 10 pm the night before it was due...I guess somethings never change.)

Then this week, Matt had a dentist appointment. He just got his invisaline trays to fix his bottom teeth. It should only take 9 weeks, but we'll see how much he really wears them. Tomorrow night we have an open house at Connor's daycare. Since Matt has only been when we signed him up, it will be good for him to meet Connor's teachers.

This weekend is our 1 year anniversary and I can't believe that a year has already passed. And then next weekend is Caroline's wedding. I feel like it was just yesterday when she was giving me the countdown of 8 months!

All in all, life is great definitely hectic, but great! Connor is a rolling maniac and is so close to pulling himself up. I promise to do a more thorough update this weekend. 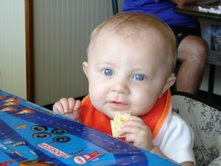 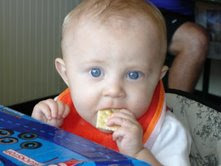 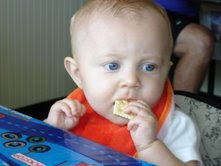 Its been another busy week in the Jones household, but honestly that's how it always is these days. We each had our own obstacles for the week but we survived! Matt survived the flu, not swine flu just type A. Thank goodness he broke down and went to the doctor because I think he would have felt a lot worse. I did kind of feel like I had twins for a couple of days, he is so pitiful when he is sick. Connor and I both have escaped the flu germs, so far!

I survived Caroline's bachelorette party! For those of you who don't know, I haven't been out on a girls night since before I found out I was pregnant. (When I say girl's night, I mean going downtown til the wee hours of the morning) We stayed at the Peabody which was beautiful. Our one goal was to see the ducks, but we were out numbered by all the Ole Miss fans!

Connor survived sitting up with out his boppy! He's still a little off balance, but he does so well. Now he looks like a big kid! We also changed his formula again this week to a soy formula. We are just going to see if it makes any kind of difference in his spitting up.

We have a big weekend planned. Caroline has bridal showers all weekend, however we are only going to make it to the Friday and Sunday ones. Then, Germantown is having their annual festival so we are going to go to that as well. And if we have time we might try to fit in the fair, I really want a pronto pup :)

Here are some of Connor's pictures from tonight before he went to bed. I really couldn't ask for a happier baby! 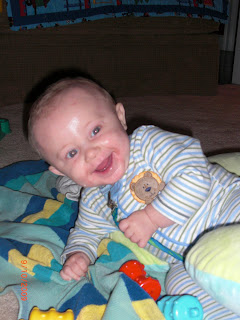 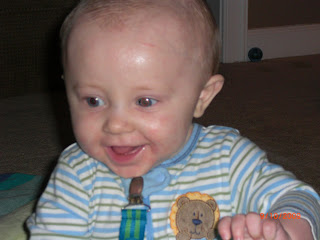 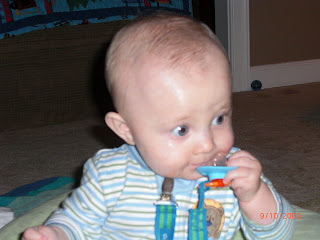 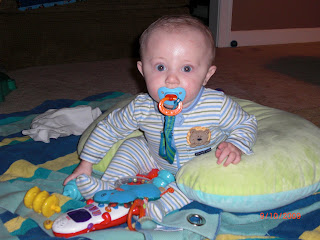 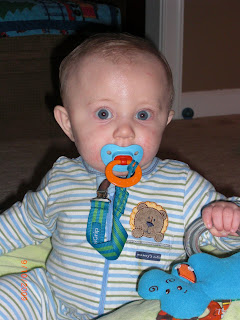 This passed weekend we had the big event of Connor's Baptism! And, Matt and I were introduced as members of the church...but we were more focused on Connor. Gigi had gotten Connor this precious outfit to wear on the big day. She first got him a 6 mos size and then we decided that might be pushing it a little, so we got the 9 mos size. Well I didn't have him try it on until a few days before and it was definitely tight! (he kept busting the bottom snaps open) 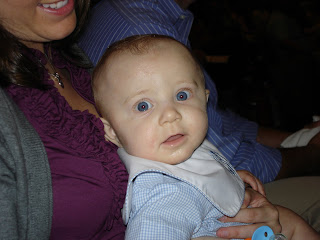 After the baptism at Hope we had a big get together at our house. We decided to get Commissary BBQ and it was probably the best decision we could have made. Caroline, Colleen and Chris were sweet to go pick up the food and set it up while we were still in the service. 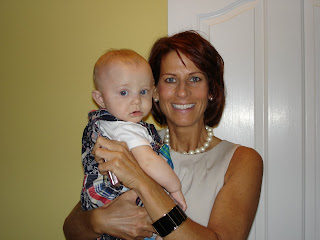 I was so happy when Colleen said that she would be coming down for the weekend! Here is Connor and Colleen, he loves her so much! 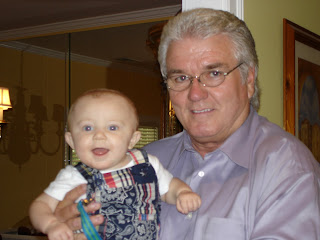 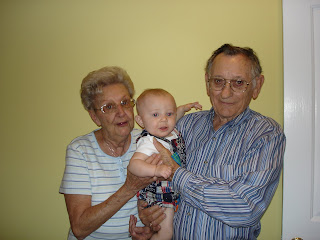 Connor with his great grandparents, Nana and Bubba 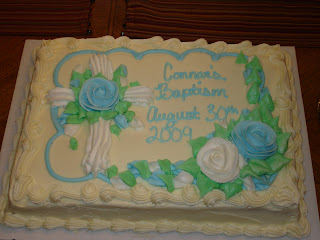 No party would be complete without a cake!

If there is one thing that I could start doing better with Connor, it would be to make sure I get pictures of him with other people. I do a good job with pictures just with him, but he'll look back and think no one was ever around! 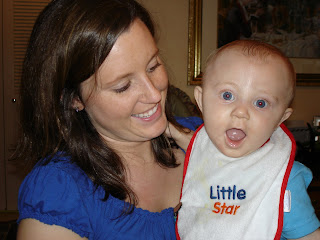 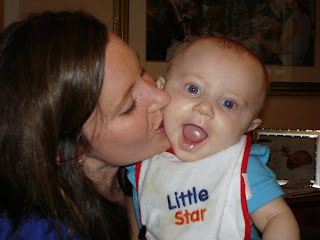 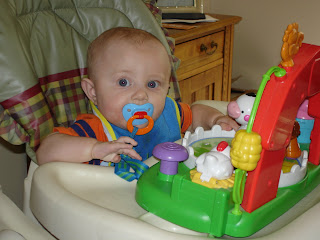